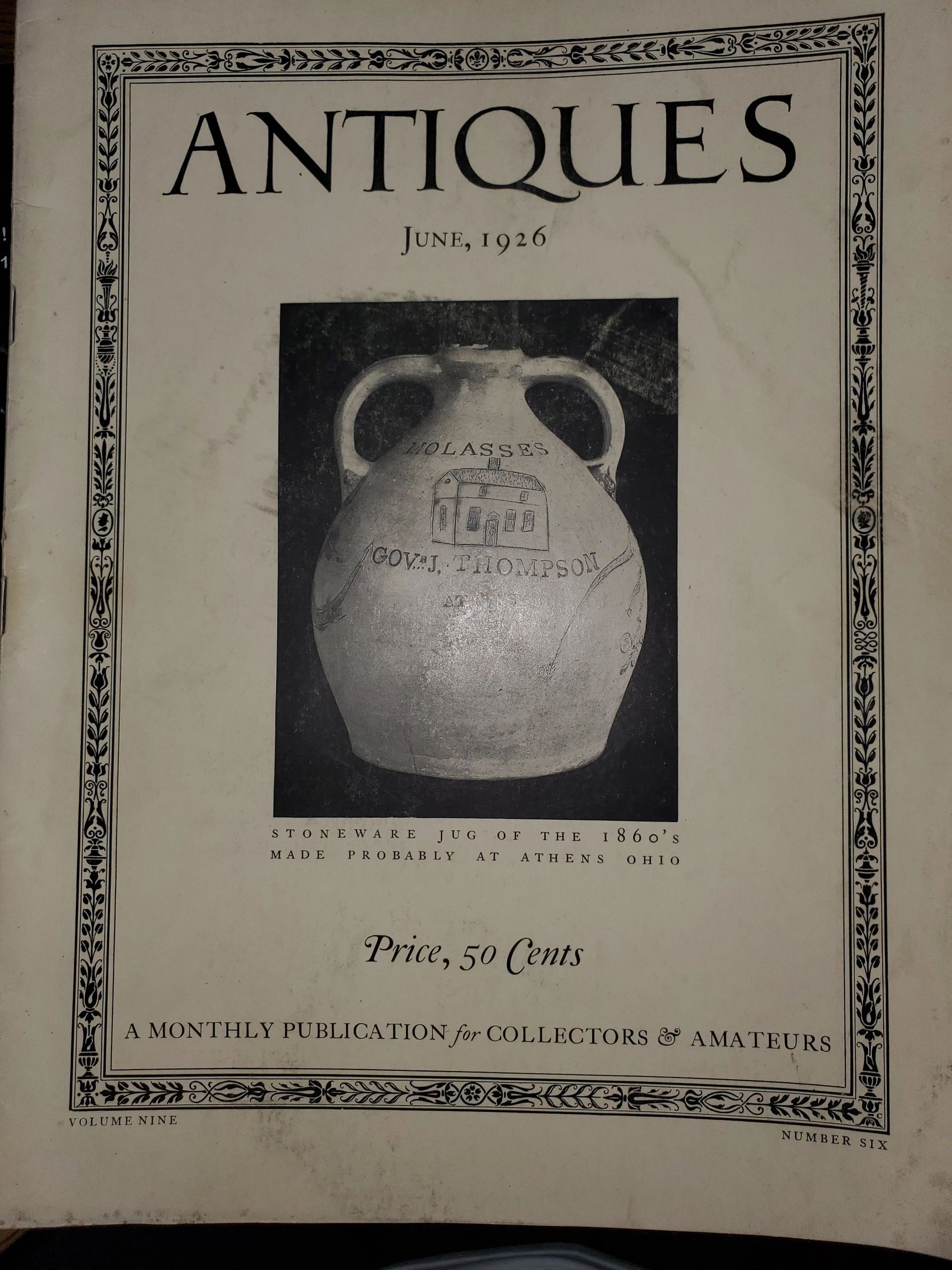 We uncovered this wonderful ANTIQUES magazine from June of 1926 and were very thrilled to find documentation of this incredible jug with incised design work. The jug was evidenced after research to be made in the 1860's in Athens, Ohio, by an unknown potter.

The jug lacks a makers stamp, but that shortcoming is completely overshadowed by the mention of one Governor Jacob Thompson and an odd and dangerous looking animal.

The article which accompanied the pictures stated that although the jug was initially believed to be a commemorative jug, it then became much more. Turns out there was much speculation as to whether or not there was such a person. The jug evidently was incised with Thompson's name after the success of his election to the Governorship of Mississippi, hesitantly reported by several encyclopedias.

The beginning and perhaps the end of the story is that this all happened during the Civil War when some of America's best stoneware was created. Aside from the heralded pieces in museums depicting flags being waved, soldiers marching off to war and President Lincolns bust, here is a jug with an obvious bias against this so called Governor. The country was at war and documentation was perhaps the least important thing to save when lives were at stake. So we know little about this jugs personal connection to this J. Thompson.

This Governor...or so called Governor, was elected in a Confederate State, during the war and REALLY hated the North and it's "repressive policy" towards the South. He plotted ways to introduce germs to cities, burn others to the ground and wanted to seize Chicago and release any prisoners in the jails there. He was, in the end, suspect in the plot to assassinate President Lincoln. 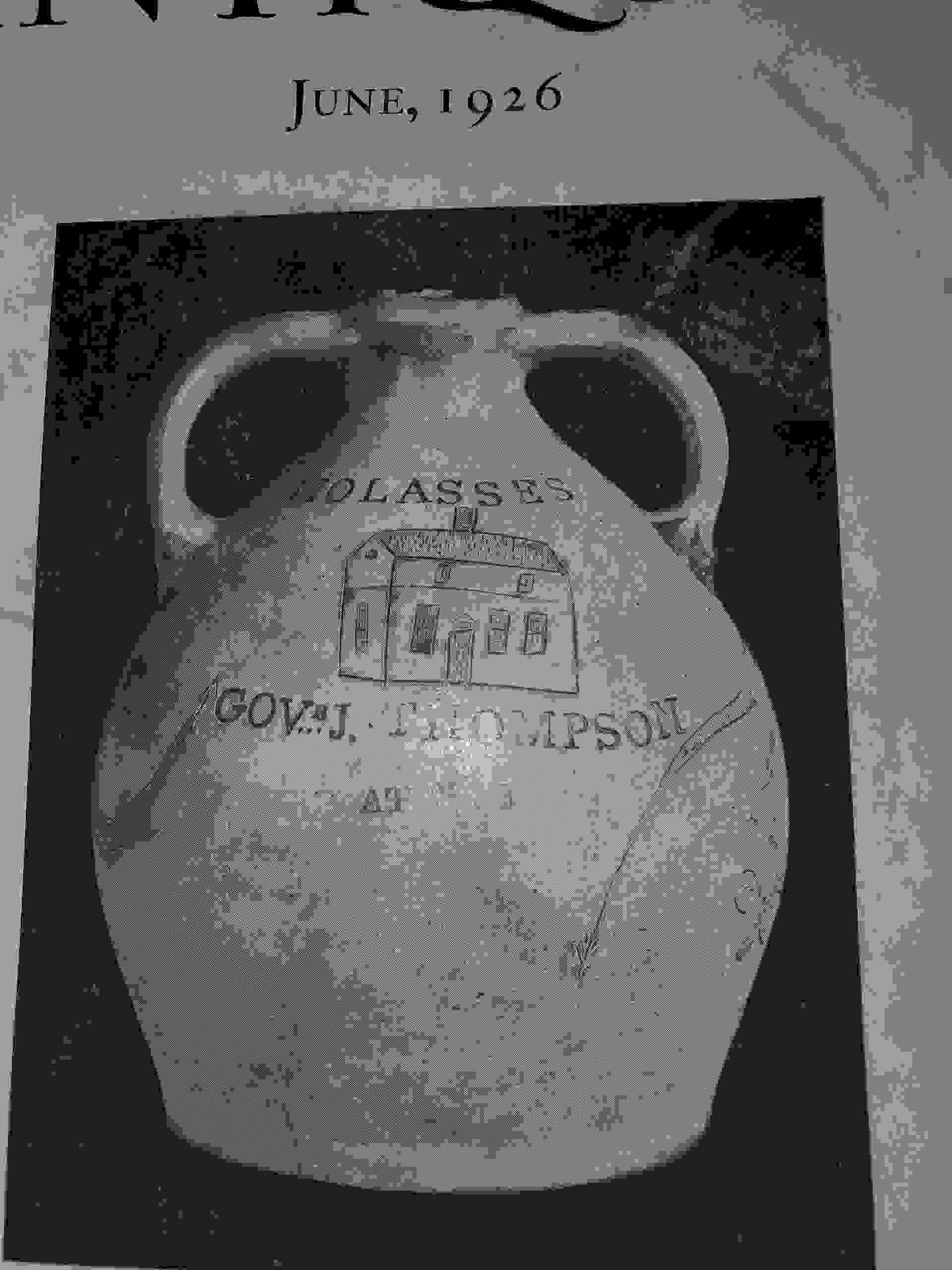 JACOB THOMPSON AND THE CIVIL WAR

Jacob Thompson was born in North Carolina in 1810. He passed the Bar and became a lawyer and moved to Mississippi to practice law. He became active in politics and once occupied the SECRETARY OF THE INTERIOR position in President James Buchanan's cabinet. Our reference to whether or not this person existed was based on his supposed title of Governor, not he himself.

Thompson ran in 1862 for the Governor position in Mississippi and lost by over 20,000 votes, which by the standards of the day was a landslide for the new Governor, a Mr. John Pettus.

SO WHAT DID HE DO DURING THE CIVIL WAR? WE ARE SURE HE WAS A SOUTHERN ACTIVIST AND WE ARE ALSO DEAD SURE HE REALLY UPSET WHOEVER MADE THIS JUG.

We bet you are asking yourself....Why did someone go to all this trouble to creatively incise a jug emblazoned with this person' name and call him Governor, when clearly he was not? GOOD QUESTION! 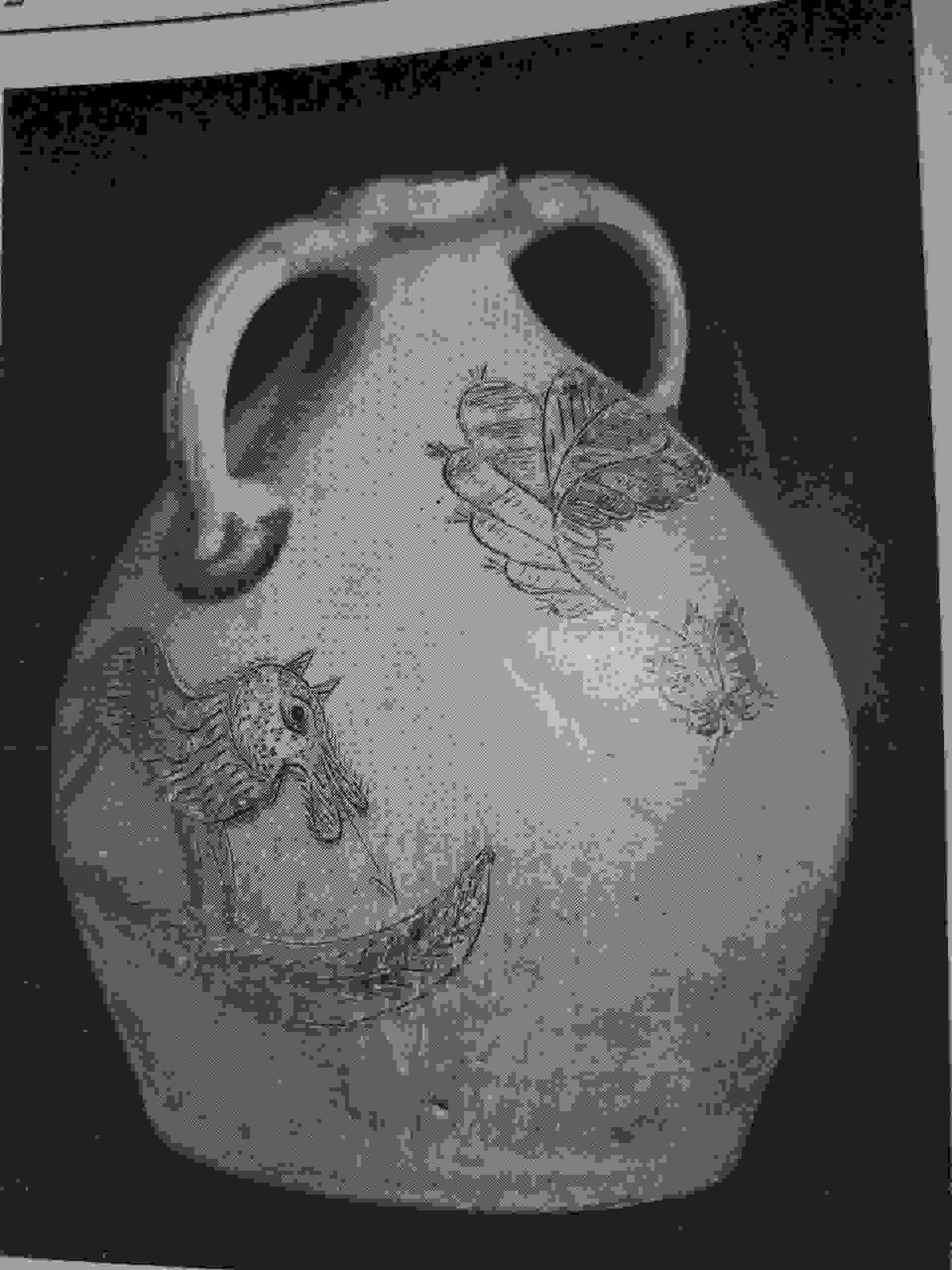 WHAT DID THIS GUY DO?

THE VERY THOUGHT THAT THIS WAS A COMMEMORATIVE JUG MADE FOR A RESPECTED PUBLIC OFFICIAL BY A LOYAL CONSTITUENT, WAS DASHED ABOUT THE TIME THIS JUG WAS TURNED AROUND TO THE BACKSIDE. THE REAR SIDE OF THIS 1860'S JUG REVEALS A MYTHICAL ANIMAL, HALF DOG AND HALF DRAGON, OUTFITTED WITH A MOST RESPECTABLE FORKED TONGUE AND DEVILS TAIL. THERE ARE A COUPLE EMBRYONIC WINGS HERE AND THE BEAST SEEMS TO HAVE POSSIBLY AN OAK CLUSTER PINNED TO THE GROUND IN A THREATENING MANNER.

THIS IS NOT THE ORDINARY MYTHICAL BEAST WE ALL HAVE SEEN IN MYTHOLOGY AND BOOKS. THIS ONE IS UNIQUE...DIFFERENT AND GHASTLY PERSONAL!

THEN, THERE IS THIS FLOATING OBJECT LIKE A FEATHER, PERHAPS ACCOMPANIED BY A BUTTERFLY, SOMETHING YOU MIGHT SEE IN A PASTORAL SETTING OR GARDEN PAINTING. INNOCENCE AND BEAUTY SOMEHOW FLOATING AWAY, POSSIBLY BEING CHASED BY THE HORRID BEAST.

LASTLY, THERE IS A MAN IN THE DOORWAY OF A BIG HOUSE, PERHAPS THE GOVERNORS MANSION? MIGHT IT BE THOMPSON HIMSELF?

SO....THE MYSTERY. WHAT DID THOMPSON DO TO DESERVE THIS? AND WHO WAS THE POTTER WHO SPENT MANY HOURS, PERHAPS DAYS, CREATING THIS MOST PERMANENT RECORD OF WHAT HE THOUGHT OF ONE MR. JACOB THOMPSON, THE ALMOST GOVERNOR OF MISSISSIPPI?

DID WE MENTION IT'S A MOLASSES JUG SPECIFICALLY? STICKY... VERY STICKY SITUATION!

SEEK AND YOU MAY FIND!

THIS JUG HAS NEVER SURFACED OR BEEN NOTED SINCE THE PUBLICATION OF THIS MAGAZINE SINCE JUNE OF 1926. THE LAST KNOWN OWNER, LIVED IN CONNECTICUT. WE ASKED QUITE A NUMBER OF INFLUENTIAL PEOPLE IN THE STONEWARE COMMUNITY IF THEY HAD HEARD TELL OF IT BUT TO NO AVAIL.

HAVE YOU SEEN THIS JUG?